The iOS 11 mptcp bug (CVE-2018-4241) discovered by Ian Beer is a serious kernel vulnerability which involves a buffer overflow in mptcp_usr_connectx that allows attackers to execute arbitrary code in a privileged context.

Ian Beer attached an interesting piece of PoC code which demonstrated a rather elegant technique to obtain the kernel task port with this vulnerability. Extending on his brief writeup that comes with the PoC, this blog post will mainly aim at walking through the PoC in great details as well as covering its background. If you are an iOS security researcher who hasn’t looked into the PoC source code yet, hopefully you will find the materials handy when you decide to do so.

Please have a copy of mptcp PoC code before we dive in! You can download it from here: Download

Let’s first take a quick look at the offending code in mptcp_usr_connect(), which is the handler for the connectx syscall for the AP_MULTIPATH socket family:

The code does not validate the sa_len field if src→sa_family is neither AF_INET nor AF_INET6 so the function directly falls through to memcpy with a user specified sa_len value up to 255 bytes.

To oversimplify a bit, kernel heap memory is divided into zones, and within one zone allocations are of the same size. For each zone, kernel keeps four doubly-linked lists to categorize a page’s memory availability, namely:

When a memory allocation is requested, intermediate page list is traversed before all_free list, and a free memory block will be returned from the first available page.

ipc_port has a struct ipc_kmsg *premsg member that points to an optional preallocated ipc_kmsg buffer. The intended use case is to allow user space to receive critical messages without the kernel having to make a heap allocation. Each time the kernel sends a real mach message it first checks whether the port has one of these preallocated buffers. In addition, this kernel heap buffer will not be freed after the message gets delivered to user space. Ian Beer uses this fact to increase the stability of the exploit.

Mach provides an IPC-based exception-handling facility wherein exceptions are converted to messages. A thread or task can register one or multiple mach ports as so-called “exception port” to receive information about an exception. When an exception occurs, a message containing information about the exception is sent to the exception port. In this way, together with a mach port with preallocated ipc_kmsg buffer, we can force the kernel to send data to a deterministic location in the heap. Furthermore, we can also partially control the content of the message by manipulating the register state at the time of the exception, which will be dutifully carried over in the message by the kernel.

By passing in a src with an unexpected sa_family, we are now able to overflow inside mpte, a mptses structure, with sa_len bytes of attacker-controlled data. Here is the struct declaration in /bsd/netinet/mptcp_var.h:

Here, the mpte_itfinfo is particularly interesting because it’s a pointer… keep digging in references to mpte_itfinfo… oh snap!

In mptcp_session_destroy, the address pointed to by mpte_itfinfo is freed, and mpte_itfinfo_size is under our complete control too! Moreover, we don’t need to know a priori the size of the object we would like to _FREE, because kfree_addr() will look up the size from the memory zone struct in which the object resides. (_FREE is just a macro around kfree_addr().)

This is just too good to be true.

Set up the heap

To turn this overflow into something actually useful, it’s time for some heap Feng Shui. The end goal here is to have an ipc_kmsg and a pipe buffer overlapping with each other so that we can write to and read from it. In the PoC, Ian Beer chooses to overwrite the lower 3 bytes of mpte_itfinfo with 0x000000, after which it will point to a 16MB aligned page boundary.

In order to have an ipc_kmsg sitting right at that 16MB boundary, the code alternatingly allocates 16MB of ipc_kmsg and a bunch of mptcp sockets in the kernel heap. The former is done by allocating fake mach ports and sending mach messages of calculated size to the port, during which mach_msg(...MACH_SEND_MSG...) will allocate kernel heap buffer for us and copyin the message from user space. This technique allows us to effectively do the same thing as kalloc but from outside the kernel. We are also able to control the memory zone for the ipc_kmsg, since all it takes is just to work backward, calculate the msgh_size based on the kalloc size we would like to achieve. In the PoC, Ian Beer chose to place ipc_kmsgs in kalloc.2048 zone.

The code in do_partial_kfree_with_socket triggers the bug, overwriting the lower 3 bytes of *mpte_itfinfo with NULL bytes and let’s hope now it somewhat looks like the diagram shown below. Fingers crossed! 🤞

After we point mpte_itfinfo to the 16MB boundary, we can trigger the _FREE by just close the socket.

One caveat is that we need to wait for mptcp_gc because mpte_itfinfo is not instantaneously _FREE‘ed after socket is closed, as evident by the comments of this function in /xnu-4570.41.2/bsd/netinet/mptcp_subr.c:

After _FREE, hopefully now one of the ipc_kmsg is freed and the page put on the Intermidiate list. 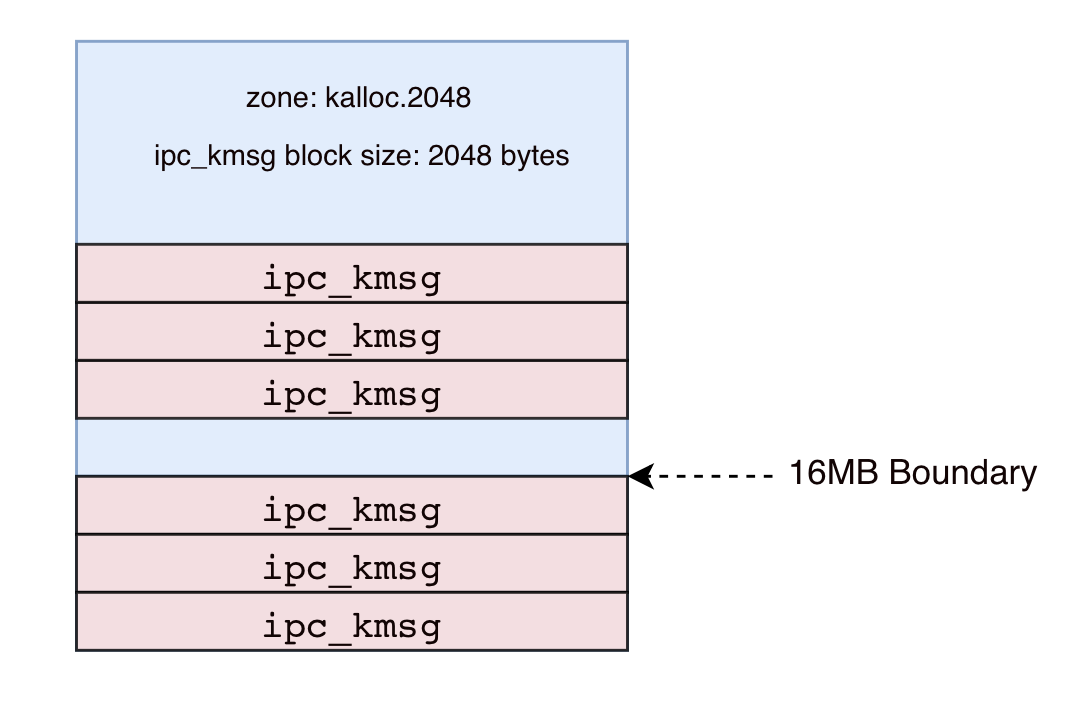 Next, we allocate a bunch of pipes and write to its write end 2047 bytes of data. The backing buffers for these pipes will come from kalloc.2048, hopefully including our 16MB-aligned address:

Trigger the bug a second time, _FREE the underlying pipe buffer and put the page on Intermediate page list again.

Next, we allocate a bunch of mach ports with preallocated ipc_kmsg buffers from kalloc.2048 zone using mach_port_allocate_full() and pass in the size as a member of the mach_port_qos_t parameter. The desired size for the preallocated buffer is 2048 bytes in order to place it in kalloc.2048 zone, hopefully one of them picks up the space we just _FREE ‘ed.

We then insert a SEND RIGHT to every mach port we allocated in this step, as each one will be registered as another thread’s exception port later.

As shown on the diagram above, ideally now we have an ipc_kmsg (which we can get messages sent to and then receive) and a pipe buffer (which we can read and write) overlapping each other.

We now need to find out which one of the hundreds of pipes we allocated a while ago is on that spot.

The technique Ian Beer used here is just to read from each pipe, and compare the content read with the original data we piped into the buffer, BBBBBBBBB (0x4242424242 in hex). If different, that means the underlying buffer has been overwritten by a newly allocated ipc_kmsg.

If we can’t find a pipe satisfying this condition it simply means there is no overlapping, and we just have to restart and wish ourselves better luck next time.

Now, we need to figure out which port owns the preallocated ipc_kmsg buffer. To do that, we need to somehow persuade the kernel into overwriting prealloced kmsg with something different so that we can compare the content again and spot the difference.

Ian Beer’s technique in the PoC is to register each port as an exception port for a thread and intentionally raise an exception on the thread, causing the kernel to send a kmsg to the buffer, then immediately compares the content by reading from the pipe. This is ingenious.

After the thread crashes, a message containing the exception information is sent to our ipc_kmsg buffer, waiting to be received and processed by the port. We can now read from the pipe and compare the content.

At this point, we have fully discovered the overlapping pipe, port pair.

We also need to save the kernel address for the host port and our task port for later:

Before we receive the exception message into user space, we want to build a fake task port to allow early kernel arbitray read.

We can do this by mimicking the structure of a proper task port:

and shoving it into our ipc_kmsg buffer with our replacer_pipe.

We can read off the kernel address of our buffer from the next field, which points back to the buffer itself given it is the only ipc_kmsg in the queue.

Let’s zoom into our ipc_kmsg buffer to observe the change. 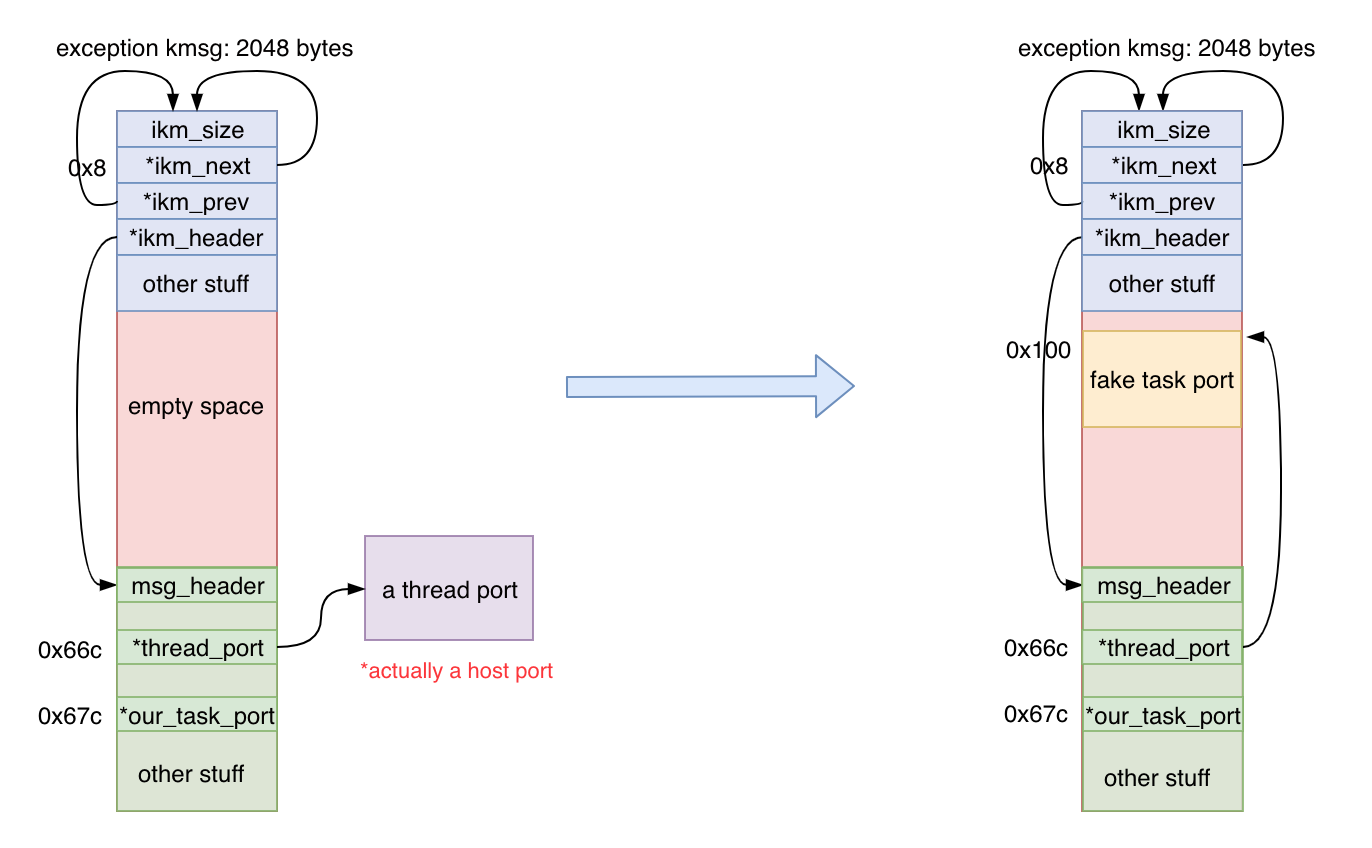 Note: Here, in this particular PoC, *thread_port actually points to a host port because in Step 3 of the previous section, we substitute the thread port with host port. By doing this, we have a leaked host port kernel address, which can be used to obtain kernel’s ipc_space later. We will cover this shortly.

User space programs can receive the exception message by a callout to system exception server, exc_server, after which various port rights in the ipc_kmsg will be inserted into calling task’s ipc_space, including our fake task port’s send right (which is really supposed to be a thread port).

We can now simply extract the port name to the fake port from the exception handler callback, from the thread argument:

At this point, we have successfully inserted a fake task port into our task’s ipc_space. Isn’t this ingenious?

With the fake task port we can build an early kernel read primitive by using pid_for_task().

Given a valid task port, pid_for_task() simply get a task pointer from port’s ip_kobject, deference and retrieve the proc pointer from task’s bsd_info , dereference again the proc struct and get the pid from it. Since all it does is just some pointer arithmetic and dereferencing, we can just create a fake task struct inside the ipc_kmsg we control, work backward and place the kernel address we would like to read at the correct offset.

With every call to early_rk32, we just need to rebuild the task port, fixing the bsd_info pointer address accordingly: 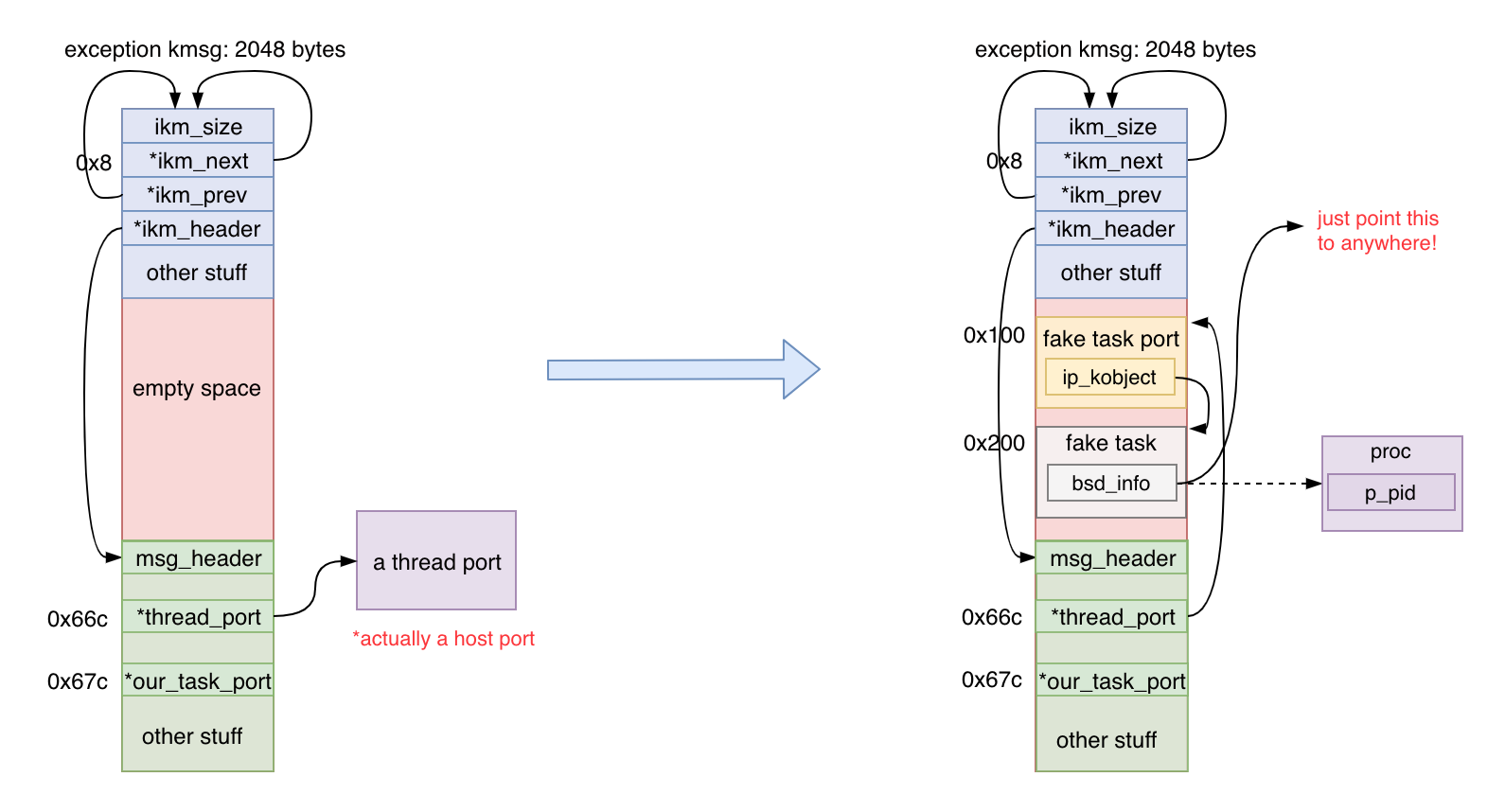 Here, unsurprisingly, 0x10 is just the offset of the p_pid field inside struct proc, as evident in proc_internal.h:

The drawback of this technique is that the read is limited to 32 bits, which is the size of a pid_t.

Notice that the struct ipc_space *receiver field in our fake port and an address space description, vm_map_t map, in our fake task is still missing. We can achieve full kernel read/write by filling in the address for ipc_space_kernel and kernel task’s vm_map.

We can get the kernel ipc_space from the host port we obtained a while ago, with a known offset:

However, kernel’s vm_map is a bit trickier to get.

After insert what we just found into our fake port and fake task, we now finally get a fully functional, but “fake”, tfp0. Hooray!

Have fun now with your freshly baked tfp0!