When talking about Apple Graphics, the WindowServer component should not be neglected. Rencently KeenLab has been talking about Apple graphics IOKit components at POC 2015 “OS X Kernel is As Strong as its Weakest Part“, CanSecWest 2016 “Don’t Trust Your Eye: Apple Graphics Is Compromised!“, and RECon 2016 “Shooting the OS X El Capitan Kernel Like a Sniper“, however the userland part is seldomly mentioned in public.

This week Pwnie announced bug nominations for 2016, where the windowserver bug CVE-2016-1804 is listed , it made me think of writing something. But when I started writing, I realized it is a long story. Then I realized a long story can be cut into short stories (I also realized my IQ is low recently which many of my colleagues have pointed out, due to extremely hot weather in Shanghai maybe, or not…)

So…I decided to split the whole story into 3. In part 1, I will mainly focus on the history of windowserver, basic concepts, architecture, CVE-2014-1314 (A design flaw which we used to take down OS X Mavericks at Pwn2Own 2014) and finally, details of the pwnie nomination bug: CVE-2016-1804, which we used to take down the latest OS X El Capitan remotely with a browser exploit and escalated to root privilege. However when I first discovered CVE-2016-1804 last year, it had been considered unexploitable, at least for 1 week. Part 1 then wrapped up here with questions/challenges.

Next week I will release part 2 for the partial exploitation by introducing an 0day which gave me inspiration of the successful exploitation of CVE-2016-1804. The last part: part 3, which is the most exciting part, is NOT a blog post, instead it will be discussed at Black Hat 2016 Briefings “SUBVERTING APPLE GRAPHICS: PRACTICAL APPROACHES TO REMOTELY GAINING ROOT“

Apple Graphics is one of the most complex components in Apple world (OS X and iOS). It mainly contains the following two parts:
– Userland part
– Kernel IOKit drivers
OS X and iOS have similar graphics architecture. The userland graphics of OS X is mainly handled by “WindowServer” process while on iOS it is “SpringBoard/backboardd” process. The userland graphics combined with the kernel graphics drivers are considered as counterpart of “win32k.sys” on Windows, although the architecture is a little diferent between each other. The userland part of Apple graphics is handled in a separate process while Windows provides with a set of GDI32 APIs which calls the kernel “win32k.sys” directly. Apple’s approach is more secure from the architecture’s perspective as the userland virtual memory is not shared between processes, which increase the exploitation difficulty especially when SMEP/SMAP is not enforced.

The client side API can be called from any client processes. Client APIs are implemented by obtaining the target mach port, composing a mach message and sending the message by calling mach_msg mach API with specific message IDs and send/receive size. Server side API is called by WindowServer’s specific thread. Both CoreGraphics and QuartzCore threads have dedicated server loop waiting for new client message to reach. Once client message reaches, the dispatcher code intercepts the message and calls the corresponding server API based on the message ID.
Here is a snapshot of WindowServer process: 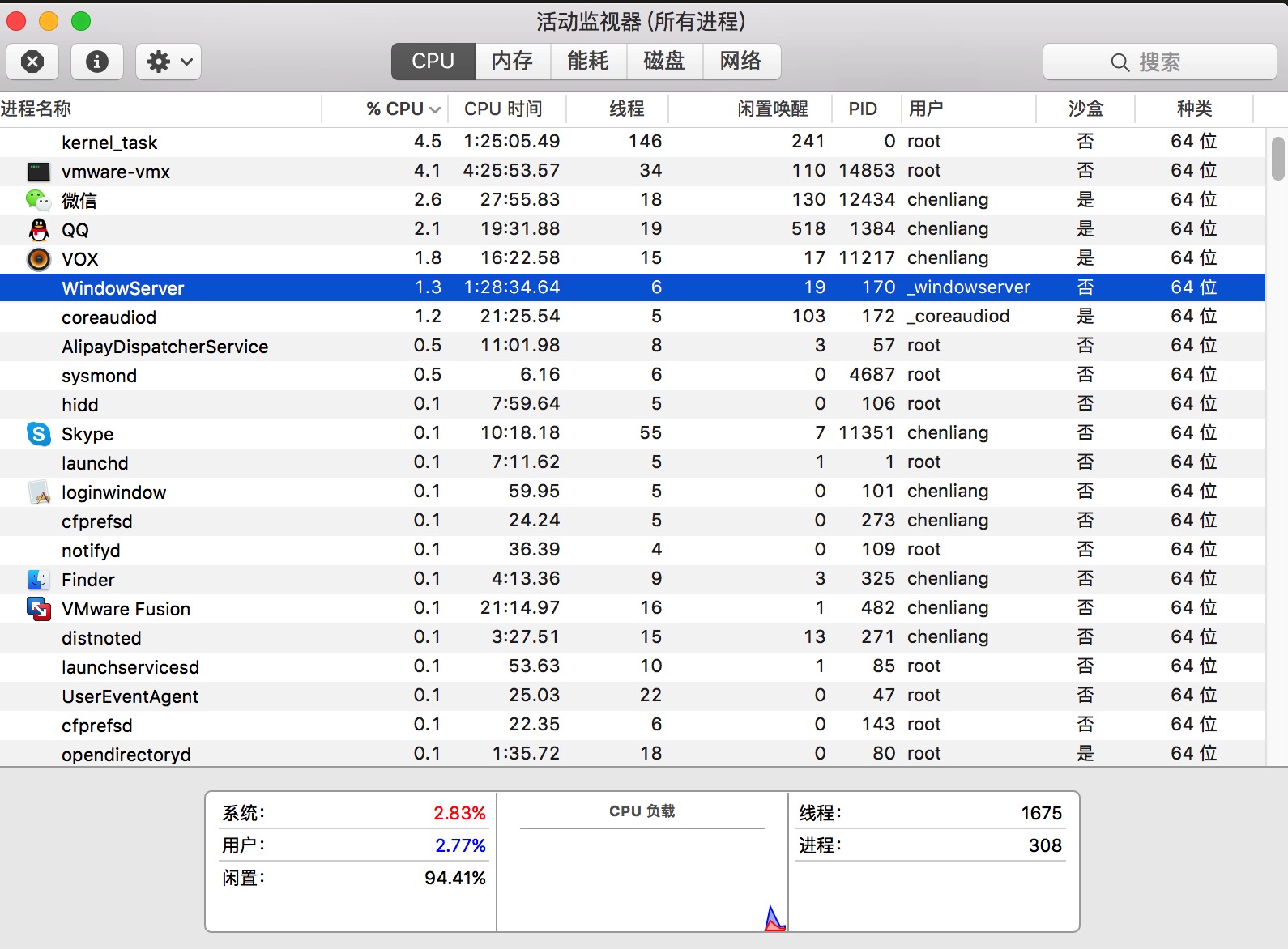 Here it seems the QuartzCore interface is not explicitly defined, so here we focus on CoreGraphics interfaces first.

Three years ago when we decided to explore sandbox escape vulnerabilities on OS X, we picked up attack surfaces which meets the following critiria:

After that, windowserver became one of our key focus on vulnerability discovery work.

MIG IPC can be described by the following graph from Google PZ’s team blog:

Like the IPC on other morden OS, MIG IPC can pass information between processes. Considering the following senario, kernel is involved in the process of the IPC:

The msg parameter is interesting, it starts with mach_msg_header_t structure:

Here the highest bit of the 32bit msgh_bits defines whether it is a simple message (0x0) or a complex one (0x1). Simple message means no pointer or port is passed to the target process, and in this case the real message data is just apended right after the mach_msg_header_t.
Complex message can be categorized into 3:

The three types are:

So when you want to send a complex message, set the highest bit of the 32bit msgh_bits to 1 in mach_msg_header_t, followed by msgh_descriptor_count indicating the number of complex descriptors in the message:

It seems to be useless to put these basic concepts here, but believe me, it is useful (maybe in part 2).

The CoreGraphics interfaces are divided into following categories:
– Workspace
– Window
– Transitions
– Session
– Region
– Surface
– Notifications
– HotKeys
– Display
– Cursor
– Connection
– CIFilter
– Event Tap
– Misc
When sandbox was introduced on Leopard, the first thought to bypass is to do a series of mouse/keyboard simulation operations (For example, to simulate moving to calc icon and double clicking it.) The first trial made me excited because it was quite easy to move the cursor on the window to anywhere from a sandboxed environment by calling _XWarpCursorPosition:

And quickly I located the function to place a double click event: __XPostFilteredEventTapDataSync:

However, in post_filtered_event_tap_data, it checks sandbox unfortunately:

Because most of the sandboxed application won’t have “hid-control” entitlement, my initial trial has to stop here.

Another thought is to add a customized hotkey by calling _XSetHotKey, but also ended up with failure:

Actually among the above API set, many interfaces are regarded as “unsafe”, thus sandbox check is performed on those server-side APIs. Typical examples include event tap, hotkey configuration, etc. Because of that, on a sandboxed application, dangerous operations such as adding a hotkey, or post an event tap (e.g sending a mouse clicking event), are strictly forbidden.

On the other side, some interfaces are partially allowed. Typical examples include CIFilter, Window related interfaces, etc. Such interfaces perform operations on specific entities that belong to the caller’s process. For example, API __XMoveWindow performs window move operation. It accepts a user-provided window ID and perform the check by calling connection_holds_rights_on_window function to determine whether the window is allowed to move by caller’s process. Actually only window owner’s process is allowed to do such operations.(or some special entitlement is needed to have the privilege allowing to perform operations on any window):

At this point, it made me believe Apple has considered everything to make Apple sandbox compatible to those older components.
But luckily I started thinking all of those in the year 2013, which is a pretty good time. I finally found a bug where Apple failed to consider.

As we know, Apple sandbox was introduced not long time ago, while Apple graphics has a much longer history. The original design of Apple graphics doesn’t take sandbox stuff into account. Although years have been spent to improve the graphics security under the sandboxed context, there are still issues left. CVE-2014-1314 is a typical example, which I used it in Pwn2Own 2014. The issue exists in CoreGraphics session APIs. CoreGraphics provides a client side API CGSCreateSessionWithDataAndOptions which sends request to be handled by server side API _XCreateSession.
_XCreateSession will reach the following code:

This function allows the user to create a new logon session. By default, WindowServer will create a new process at “/System/Library/CoreServices/loginwindow.app/Contents/MacOS/loginwindow” and launch the login window under the current user’s context (by calling setuid and setgid to the user’s. Oh, WindowServer has can setuid!!). Apple also allows user to specify customized login window, which - on the contrary - allows attackers in the sandboxed context to run any process at an unsandboxed context.

Now let’s back to the year 2016. In CoreGraphics, some new interfaces (We count them as Misc category) were introduced to align with new models of MacBook. For example, interface _XSetGlobalForceConfig allows a user to configure force touch. Users can provide with force touch configuration data and serialize them. _XSetGlobalForceConfig saves the serialized data into CFData and call _mthid_unserializeGestureCon guration API to unserialize the data.

Here I leave the questions to readers and I will discuss about the exploitation at Part 2 next week.