In previous blog posts Liang talked about the userspace privilege escalation vulnerability we found in WindowServer. Now in following articles I will talk about the Blitzard kernel bug we used in this year’s pwn2own to escape the Safari renderer sandbox, existing in the blit operation of graphics pipeline. From a exploiter’s prospective we took advantage of an vector out-of-bound access which under carefully prepared memory situations will lead to write-anywhere-but-value-restricted to achieve both infoleak and RIP control. In this article we will introduce the exploitation methods we played with mainly in kalloc.48 and kalloc.4096.

First we will first introduce the very function which the overflow occurs, what we can control and how these affect our following exploitation.

IGVector is a generic template collection class used frequently in Apple Graphics drivers. On the head of it lies the currentSize field. Right following the size we have a capacity denoting the current volume of the vector. storage pointer goes after capacity field, recording the actual location of heap objects.
rect_pair_t holds a pair of rectangles, each rectangle corresponds to a drawing section on screen. The fields of rect is listed as follows:

x,y denote the coordinate of rect’s corner on screen, while w,h denote the width and height of rectangle. The four fields uniquely locates a rectangle on screen. The initial arguments of rectangle is passed in via integer format, however after a series of multiplication and division they become an IEEE.754 floating number in memory, which makes Hex-rays suffer a lot because it can hardly deal with SSE floating point instructions :(

When the overflow occurs, the memory layout is shown as the following figure.

As the figure shows, the add function is called on a partially out-of-bound 48-size block. The size field is fixed to 0xdeadbeefdeadbeef, because kalloc.48 is smaller than cache-line size, thus it will always be poisoned after freed. Good news is both capacity and storage pointer is under our control. This means we have a write-anywhere primitive covering the whole address space, by carefully preparing content satisfying the following equation, let

However we have a write-anywhere but it’s not a write-anything primitive. The rectangles initially have their fields in signed int16 format, falling in range [-0x8000, 0x7fff]. As the function is called, they have already been transformed to IEEE.754 representation in memory, which implies we can only use it to write two continously 4-byte value in range [0x3…, 0x4…., 0xc…, 0xd…, 0xbf800000] (0xbf800000 is float representation of -1) four times, corrupting 32 bytes of memory.

We need to precisely prepare controlled value right after the overflowed vector, otherwise the kernel will crash on a bad access. Unfortunately kalloc.48 is a zone used frequently in kernel with IOMachPort acting as the most commonly seen object and we must get rid of it. Previous work mainly comes up with io_open_service_extended and ool_msg to prepare the kernel heap. But problem arises for our situation:

We can prepare our sprayed content in the array part as the following sample XML shows, and slightly changes one char per spray to satisfy condition 3. Also OSString accepts all bytes except null byte, which can also be avoided. The spray goes as we call IOCatalogueSendData(masterPort, 2, buf, 4096} as many times as we wish.

So we have this following steps to play in kalloc.48 to achieve a stable write-anywhere:

Write a float to control RIP

After we have made the write itself stable, we move forward to turn the write into actual RIP control and/or infoleak. The first idea that will pop up is to overwrite some vtable pointer at the head of some userclients. Seems at first hand this vulnerability is not a very good write primitive because we will certainly corrupt the poor userclient, as shown in the following figure: 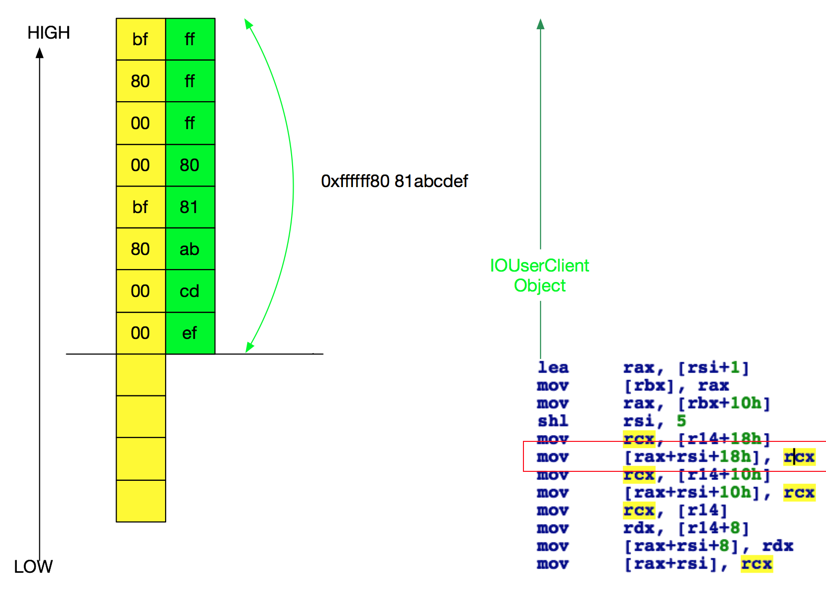 In OSX kernel addresses starting with high byte at 0xbf is almost impossible (or you can just say impossible) to be occupied or prepared for some content. But we are also unable to adjust the value we write to start with 0xffffff80 to point the address to a heap location we can control due to the nature of Blitzard.

But thanks to Intel CPUs, we can make a qword write at an unaligned location, i.e. 4byte offset. 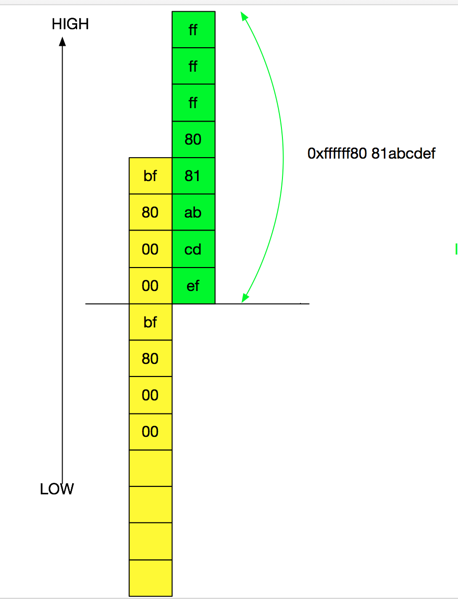 This looks reasonable but we found the stability is not promising. This is because in the huge family of userclients, it seems only RootDomainUserClient has a virtual table pointer high bytes of which is 0xffffff80. Other userclient friends all have vtable pointer address 4th byte of which is 0x7f. Address spaces starting with 0xffffff7f00000000 are usually occupied by non-writable sections so it’s not possible to manipulate memory here to gain some degree of memory control, while on the other hand, address spaces high bytes of which are 0xffffff80 expose some possibility to contain heap regions.

But RootDomainUserClient is a small userclient and we need to spray lots of them to guarantee that at begining of a particular PAGE there’s good chance the RootDomainUserClient falls there. However quickly we found out the spray speed decreases obviously as the number of userclient increases. After some investigation we found out the root cause of this issue, check the following code snippet.

Can things be worse? Let’s go further. When userclients are opened, they need to be attached to their parent. This will in turn call parent->attachToChild

The links is an OSArray, and setObject inserts new userclient into the array storage, which calls into this expensive function 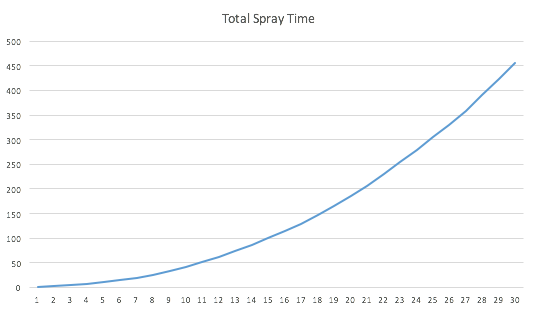 So in a conclusion, the spraying time has a N^2 time complexity relationship with opened userclient per service. This may not be a big problem for powerful Macbook Pros, but we found the Core M processor in the new Macbook (which is unfortunately the machine we need to exploit in Pwn2Own competition) as slow as grandma, which forces us to found better and faster ways.
Fortunately, a new method pops up and we solved RIP control and info leak problems in one shot. That’s perfect.

As we searches for helpful userclients, the following criterias must be met:

We have to admit directly overwriting vtable pointers is not a good solution for our vulnerability. Can we overwrite some field pointers of userclient? The answer is yes. IGAccelVideoContext is a perfect candidate with size 0x2000. Nearly all IOAcceleratorFamily2 userclients have a service pointer associated, and it point to the mother IntelAccelerator. In the following figure we can see at offset 0x528 we saw the appearance of this pointer. It’s a heap location which means we can use the previous mentioned so-called slide-writing to overwrite only lower 4bytes to make it point to heap memory we can control.

Further study reveals there are virtual function calls on this pointer. But we need to take extra caution as we cannot directly call the fake service‘s virtual function, because the header of vm_map_copy is not controllable. So we take another approach as we found out context_finish function does an indirect call on service->mEventMachine,

We now adjust our goal to overwrite the service field of any IGAccelVideoContext. Given no knowledge of heap addresses, we again need to spray lots of userclients to achieve our goal. After trial and errors we finally took the following steps:

This code snippet shows how to do the previous mentioned steps:

You will be more clear with this figure.

Smart readers may have noticed a critical problem. Given the size of userclient is 0x2000, how can you be sure that head of the userclient falles right at A? Why can not A falls at middle of the IGAccelVideoContext.

So you can now understand why I mentioned earlier we may need to do a double-write in kalloc.48. By changing the value of sprayed content in IOCatalogueSendData in a odd-even style, and triggering the vulnerability multiple times, we can ensure that there’s a nearly 100% chance that both two locations will be overwritten.

We know Steve Jobs (or Tim Cook?) will not make our life so easy as we still have a big obstacle to overcome: the Royal kASLR, even we have already figured out a way to control RIP. But when there’s a will, there is a way.
Let’s revisit what we have. we have known address A covered with IGAccelVideoContext. Known address B covered with vm_map_copy content controlled and we can also change the content as we wish, just freeing and refill the ool_msgs. Are there any function of some userclients that will return a particular content at a specified address, given we now control the whole body of the fake userclient?

With a bit of luck the externalMethod function get_hw_steppings caught our attention.

Given the service + 0x1288 is controlled by us, this is a perfect way to return value at arbitrary address. Although only one byte is returned, it’s not a big deal because we can free and refill the ool_msgs as many times as we wish and read one byte by one. We now come up with these steps.

Smart reader will again noticed that we are currently assuming A falls at beginning of a IGAccelVideoContext. Also, nobody guarantees B falls right at the beginning the 0x2000 size vm_map_copy. It’s also a 50-50 chance.

For the latter, we take the same approach. When we are preparing ool_msg, we change 0x1288 and 0x288 both to A - 0xD0. For the former problem it’s a bit more complicated.

We have an observation that at the 0x1000 offset of a normal IGAccelVideoContext, the value are zero. This gives us a way to distinguish the two situations, given that now we can read out the content at address A. We can use an additional read to determine if the address is at A or A+0x1000. If we try A but its actually at A+0x1000, we will read byte at +0x1000 of IGAccelVideoContext, which is 0, then we can try again with A+0x1000 to read the correct value.

These two figures may give you a more clearly concept on this trial-and-error approach.

Leak arbitrary address, leak vtable pointer, prepare your gadgets, ahh. I’m a bit tired hmm, so if you are curious about what the blitzard vulnerability itself actually is, don’t miss our talk at Mandalay Bay GH at August 3 11:30, Blackhat USA. Wish to see you there :)

Also, it’s a pity the vulnerability is not selected for pwnie nominations, we will come up with a better one next year :)

Here is the video, some spraying time is omitted: